This month of May annually commemorates Cinco de Mayo, a nationalistic holiday in México which marks the Mexican military victory at the Battle of Puebla. This battle, which occurred on May 5th, 1862 near the Mexican city of Puebla, resulted in México’s army defeating the French occupying forces of Napoleon III.  In today’s México, on each Cinco de Mayo (May 5th), Mexicans continue to celebrate their historic defeat of what was originally seen as a strong foreign invasionary force.

As I recently reflected on this Mexican national celebration, I also remembered how, with little fanfare, Earth Day had just passed on April 22nd.  This then had me thinking about Canada Day (formerly Dominion Day), my birth-country’s national holiday that has increasingly become a grander annual celebration on each July 1st. And then I also considered Independence Day, which is proudly celebrated by our Norte Americano USA neighbours on each July 4th.  The Three Amigo NAFTA partners each have their own unique days to celebrate their perceived national greatness, with all of these special days seeming to exceed in importance that otherwise obscure annual day called Earth Day.

If you were in a spaceship looking down upon Earth, human eyes do not see any clearly defined countries and their related border lines on a map.  This is because such things as countries and borders are in actuality mere constructs of human thought.  All human eyes see when looking downward upon Earth from space is an image such as this: 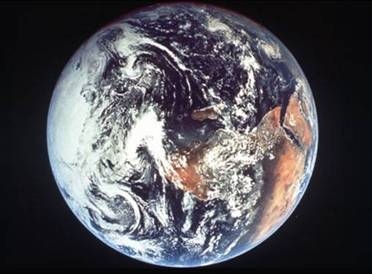 For from space, our human eyes simply see one, small, finite, shared, and fragile planetary home.  Our eyes look down upon a planetary sphere for which we humans have constructed the more modern name of Earth: a single entity which itself is an individual miracle of life and which collectively holds countless miracles of life.

Yet with this rather paradoxical sight of a shared single fragility now having been amongst humans for nearing 40 decades through photographs, it makes me wonder aloud what continues to encourage humanity to so loudly celebrate the artificial: that is, those constructs we call countries and their perceived moments of heroic greatness.  And yet humans do so all the while continuing to choose to ignore the real: that is, our one shared planetary home on whose own health and well-being relies humanity’s very survival.

Nationalism unchecked has near always been the cause of many travesties committed in both its name and for its supposed higher good.  No country or culture has been immune from the negative consequences of nationalism, for nationalism’s downside is often a sense of superiority felt by the “in” nationalist group at the expense of any perceived “out” group.  Thus unthinkably horrendous atrocities, such as holocausts and genocides, have become living realities through the guise of nationalism.

At this juncture in humanity’s existence, any nationalism narrowly rooted in the false idea of the superiority of any one country or culture only represents a truly archaic thought system.  Such dated forms of nationalism ignore the reality that while the cultural and other mental constructs of humans may differ – or otherwise stated, that while humans’ thoughts related to our sense of selves may differ between and amongst humans – at the core of our very being all humans remain one and the same species. Thus, arising from this sense of a united humanity, a Human Nationalism might superficially make greater sense.  But in actuality, even a human nationalism would be no better and no less limiting than arcane nationalisms.  That is because a human nationalism would also be restricting humans to celebrating the greatness of one identified “in group” at the expense of the many “out groups”: or specifically stated, it would result in humans misguidedly trying to celebrate the perceived greatness of that one limited species known as homo sapiens sapiens and doing so at the expense of all other life.

Science is increasingly revealing that all life on Earth is interconnected and interdependent in ways human minds cannot begin to fathom, let alone comprehend.  This dynamic reflects this variant of the old Chaos Theory example, one where a butterfly flapping its wings in Asia can lead to a hurricane in the Caribbean. The science of Climate Change has been increasingly clear that 100’s of years of industrial pollution spewed in to Earth’s atmosphere by Western Industrialised economies – countries who are now joined by new emerging economies who themselves are increasing their atmospheric pollution in their efforts to quickly “catch-up economically” to the West – is resulting in climatic changes on Earth that have the potential to harm all current existence on our shared planetary home.

With a growing body of science speaking to interconnexions within and between all life on Earth, is not the time ripe for humans to practice an Earth Nationalism?  Yet not an Earth Nationalism rooted in the negativeness (exclusiveness) of nationalisms of old: one that would be along the lines of where humans would simply morph into becoming “Earth First” nationalists and so become a people who start to both think and feel that Earth itself IS the best planet in the universe.

A new Earth Nationalism would be one grounded in a positiveness (inclusiveness).  It would arise from a place of deep inner understanding that ALL life – whether each and every life form on Earth, or even any other life that might exist elsewhere in the universe – has intrinsic value and so is to be respected in and of itself.

This new Earth Nationalism would arise to celebrate ALL life, no matter its variety, form or potential geographic location in the universe.

Then Earth Day, as celebrated in the future, can be the primary global day on Earth for humans to be nationalistic.  Earth Day would be that day for humans to celebrate their Earth Nationalism: a nationalism which would be purposely redirected away from the negative exclusion of any and instead intentionally rooted in the positive inclusion of all of the miracle of life.

Your thoughts are always welcome, whether on this blog-spot or any other matter related to Sustainable Development.