Skip to content
by Thomas C. Esakin Comments Off on Cautious trust of life in The Galapagos. Or the socialisation of fear. 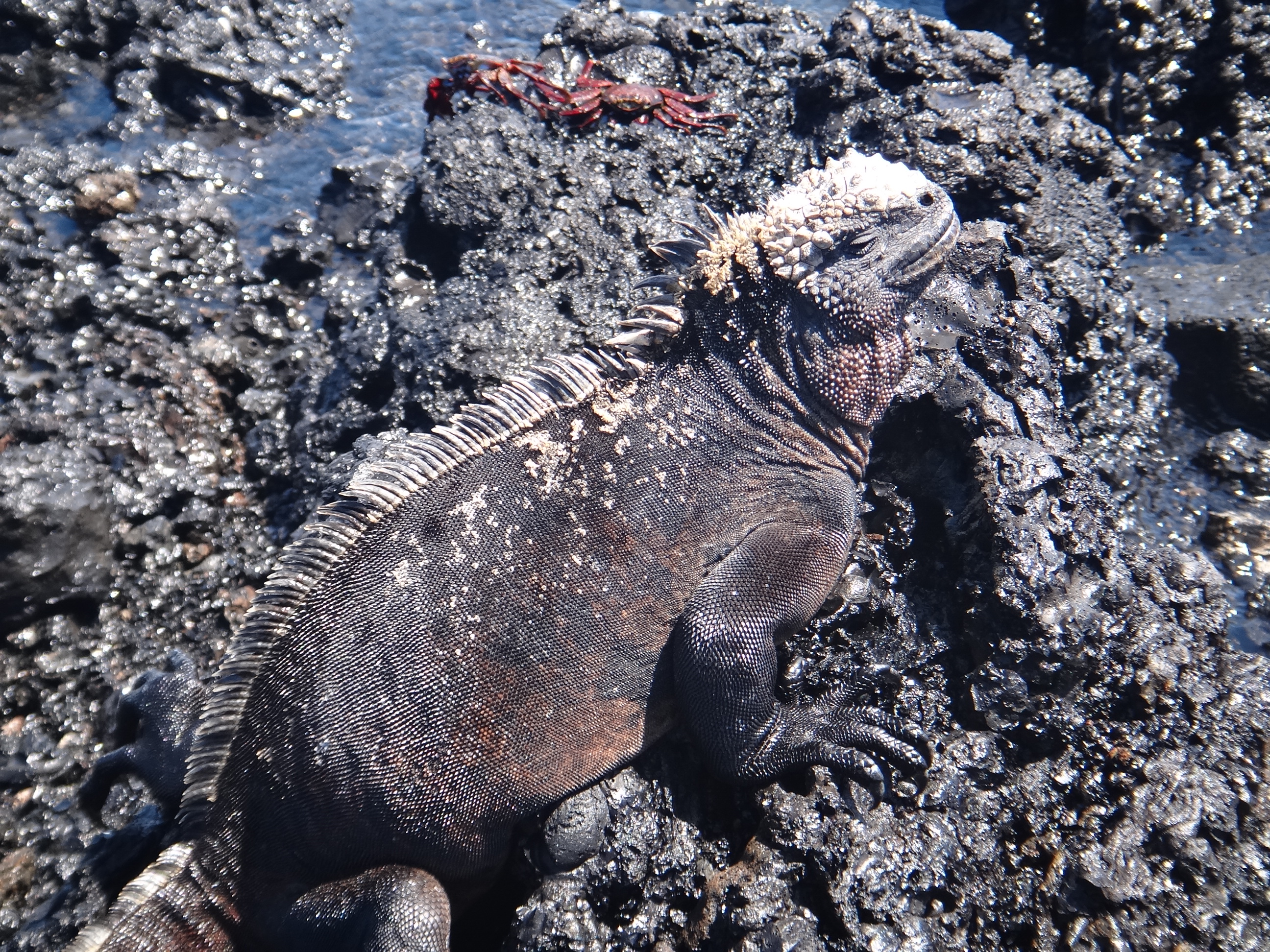 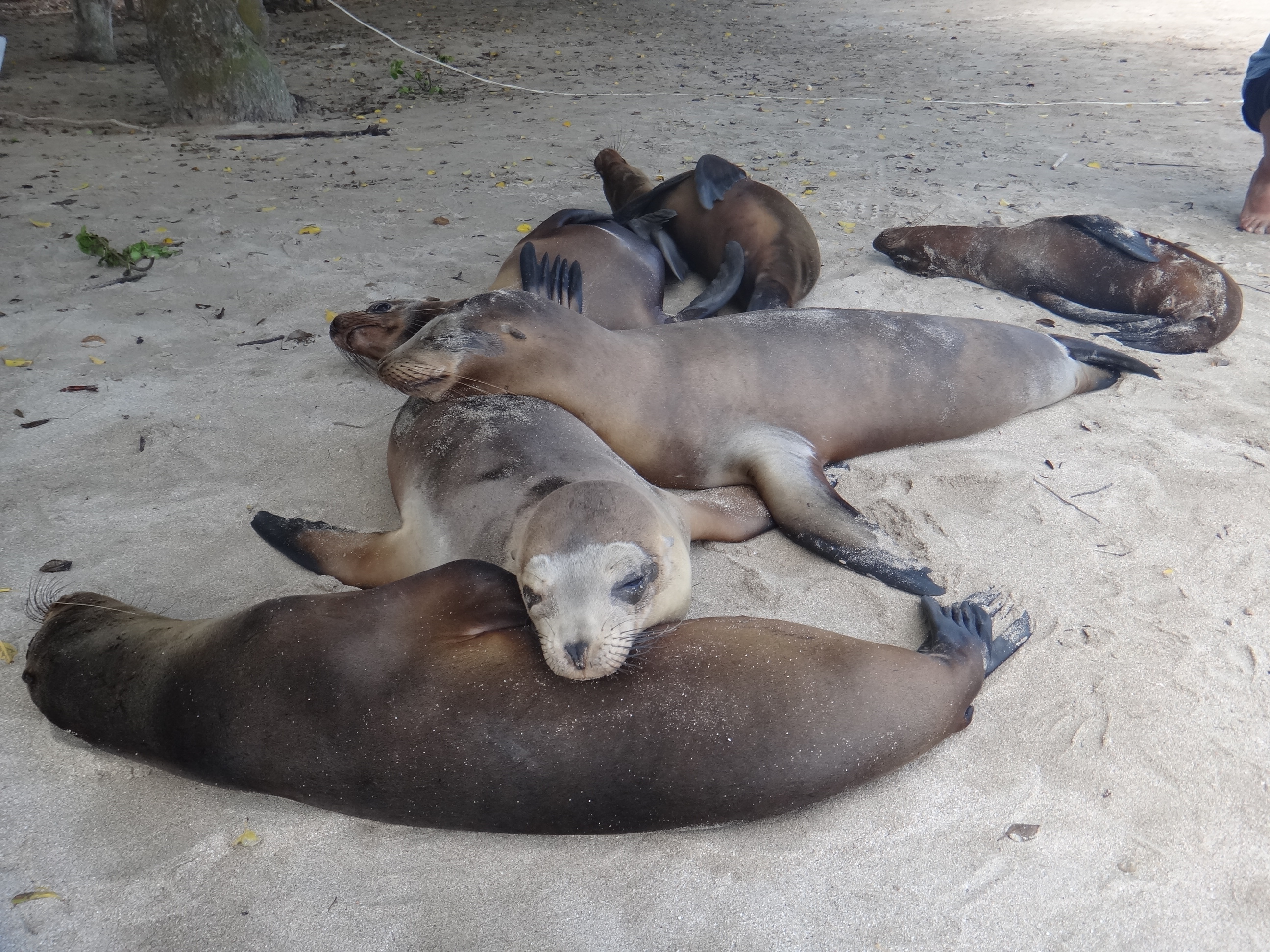 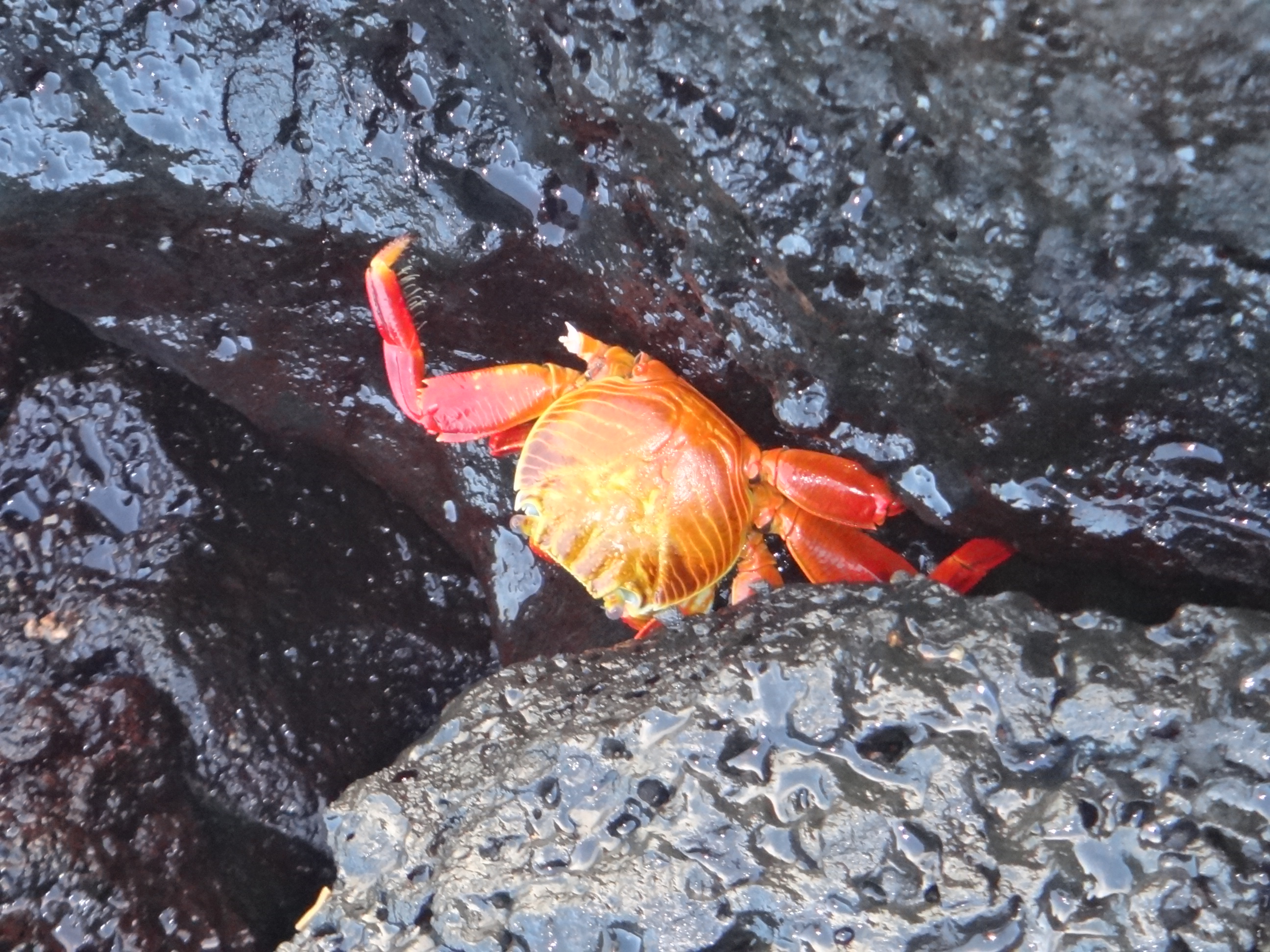 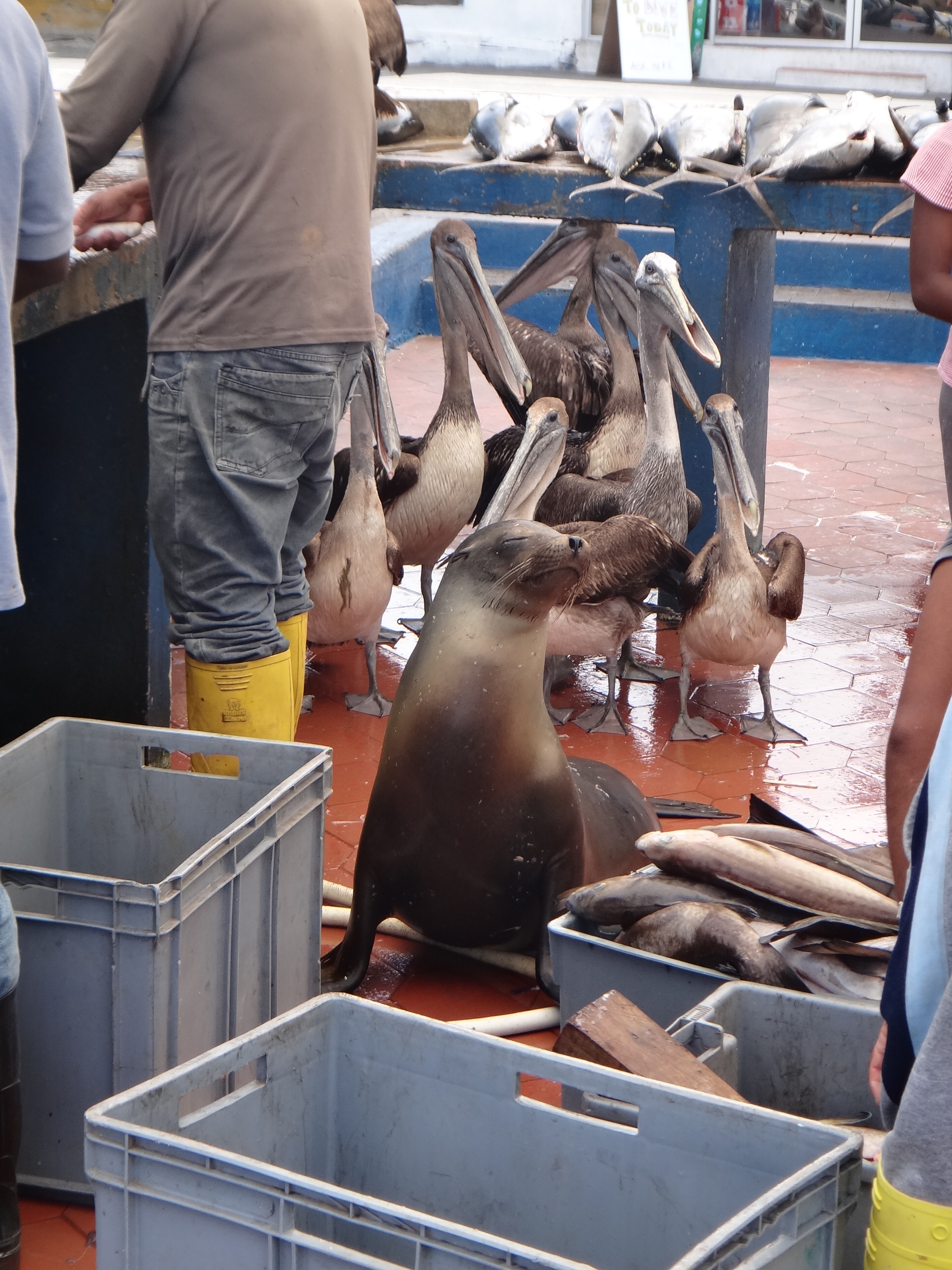 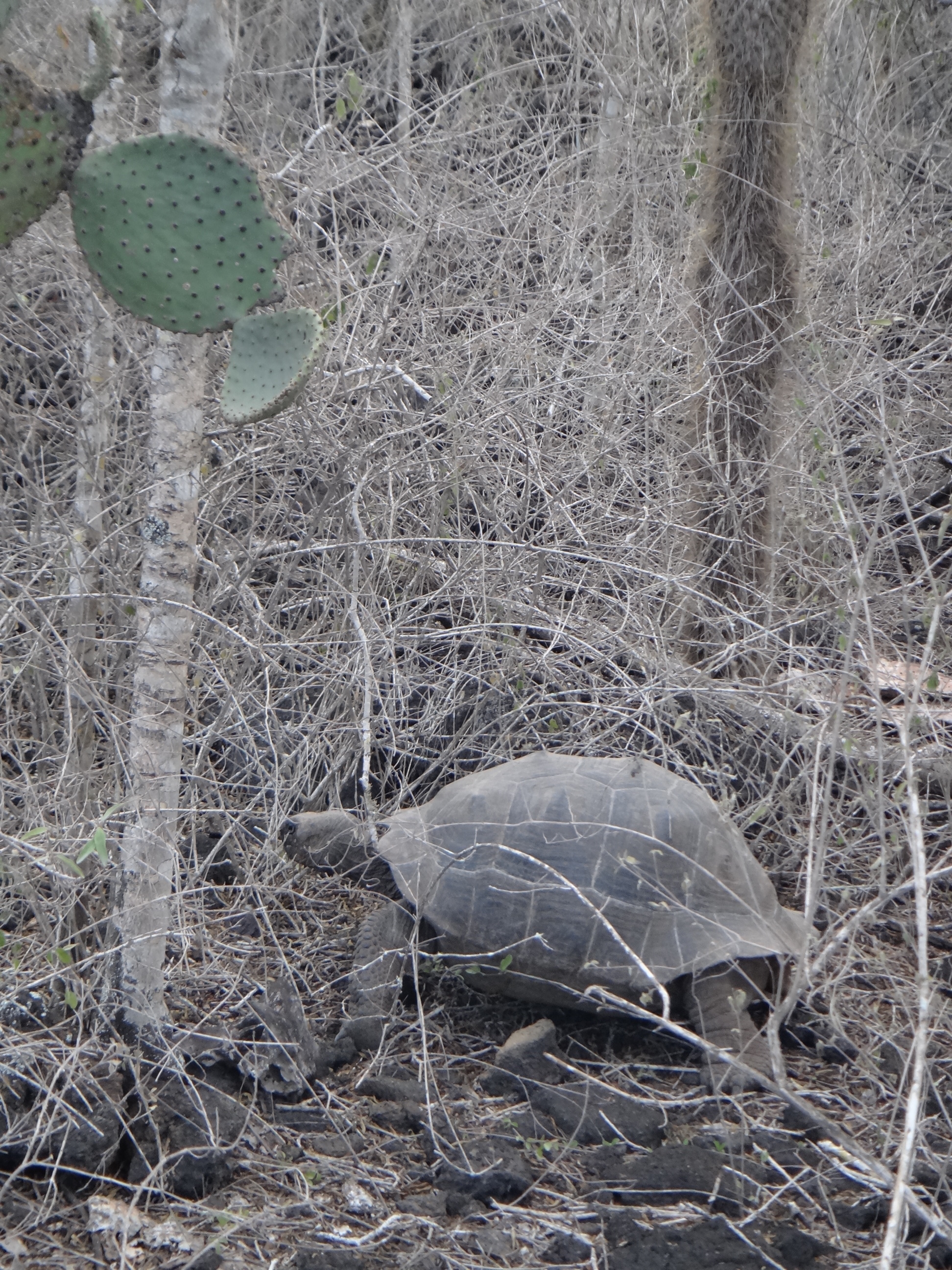 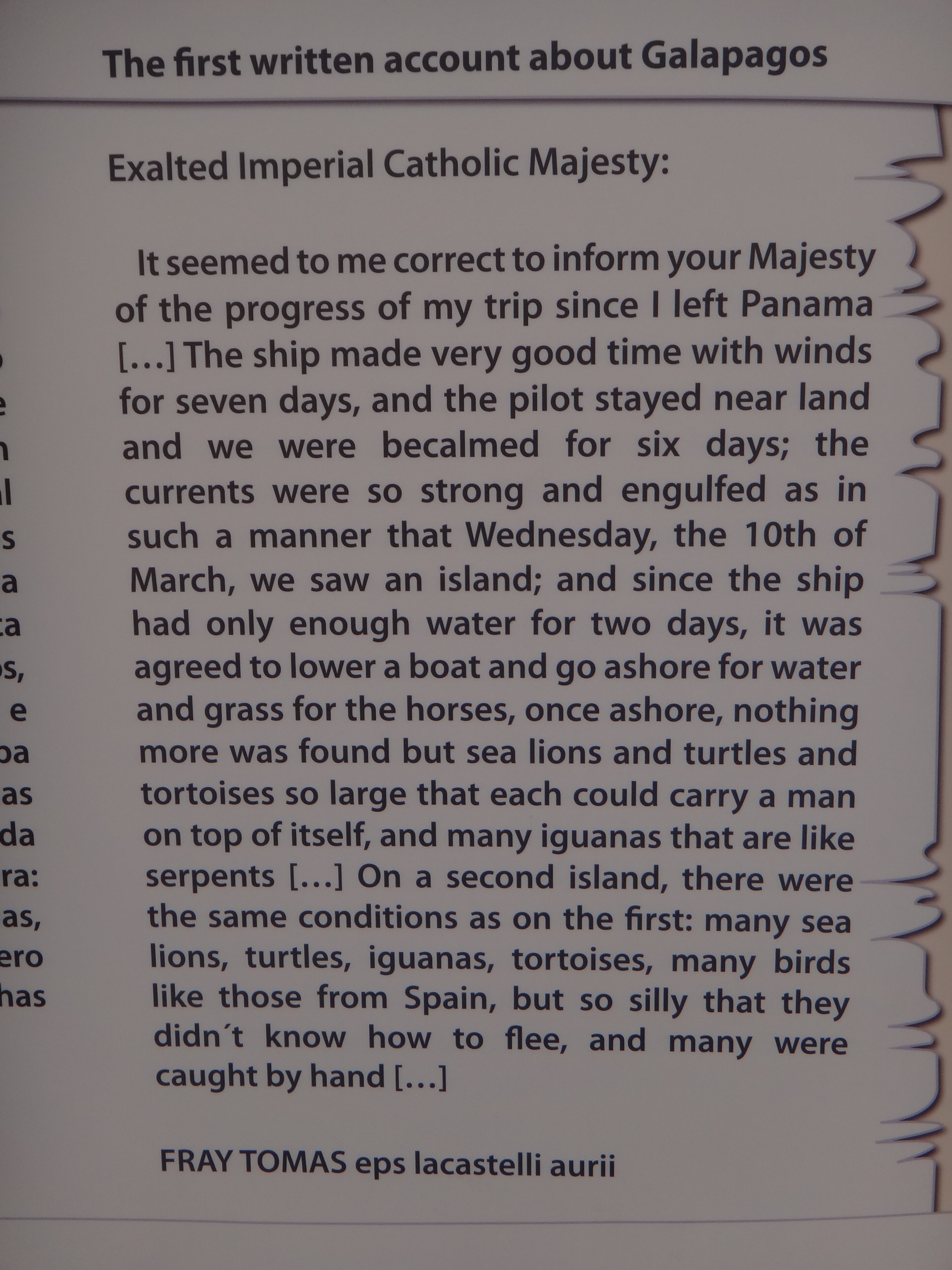 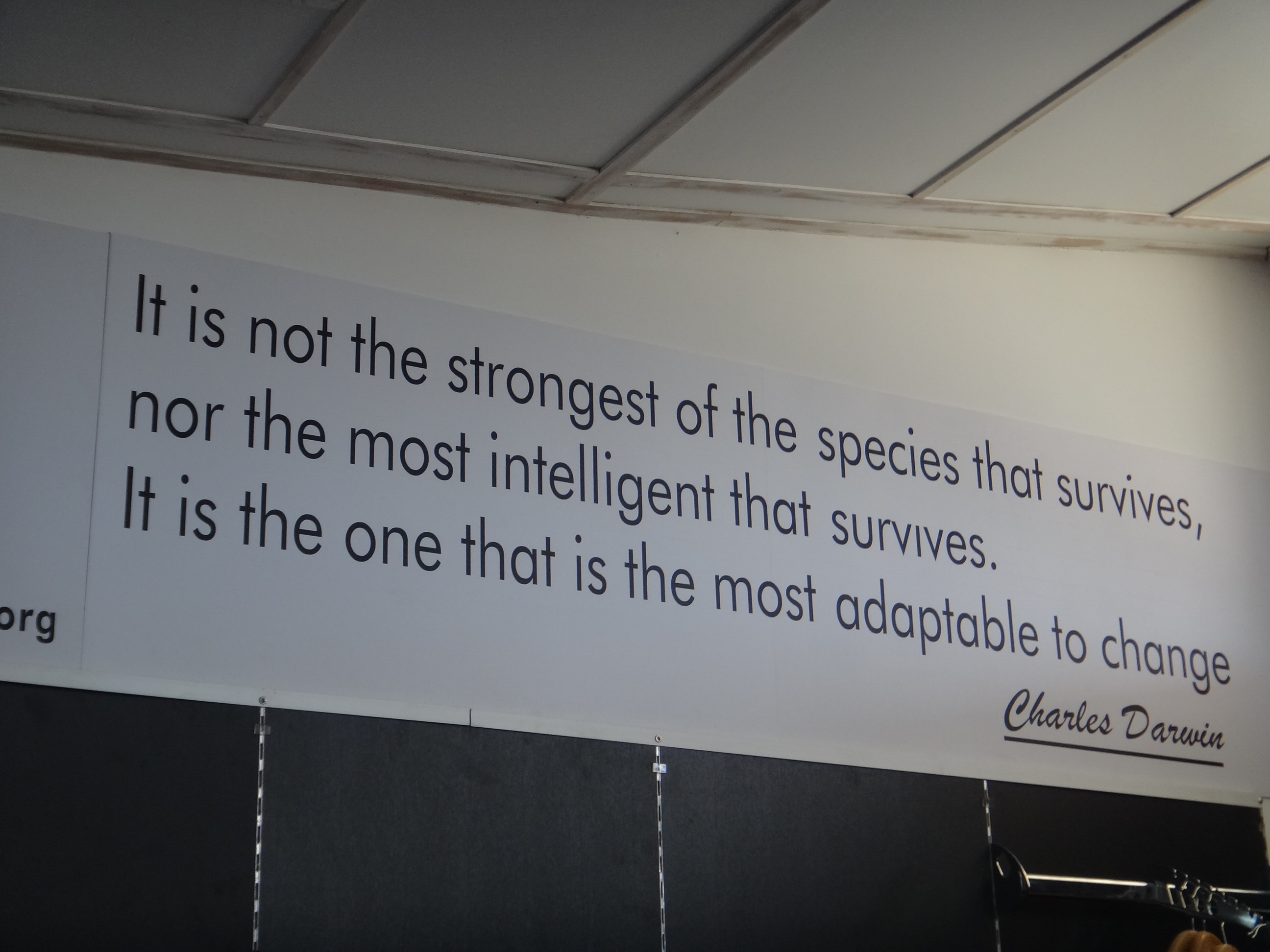 The Galapagos Islands, Ecuador. Where a human being can learn with certainty that there are other animal-beings that only fear the human animal because, over time, many humans have chosen to create a fear of our species in those other beings.

Sea Lions that frolic in the ocean waters alongside humans. Giant Tortoises that saunter about an often rocky-landscape as human beings observe them in their natural habitat. Marine Iguanas that look on, seemingly carelessly, at the humans standing next to them. Penguins that swim by while various of us humans are snorkelling. Pelicans and Sea Lions that see the town fish market as a place to hang out with humans while they look for a chance meal. Sea Turtles lazily-swimming within easy eye-sight of our lancha.

The beauty of life as lived in The Galapagos: there for an eye to behold and any open-spirit to soak-in, contemplate, and appreciate.

When in February 1535 the Spanish ship that Bishop Fray Tomás de Berlanga was on found itself without wind and so moving from Panama on the drifting Pacific Ocean currents, come March of that same year he and the ship’s crew came across what he later called The Galapagos Islands; so named by him for the “galapago” (an ancient Spanish word for “saddle”) looking shell of the Giant Tortoises he encountered on the islands. In the Bishop’s follow-up letter to Charles V, in which he advised the Spanish Crown of his island discoveries, this first written account about the Galapagos Islands notes: “…many sea lions, turtles, iguanas, tortoises, many birds like from Spain, but so silly that they didn’t know how to flee, and many were caught by hand…” (as quoted at: Interpretation Centre, Parque Nacional Galápagos, Isla San Cristóbal, Puerto Baquerizo Moreno, Ecuador). Thus, from their earliest days of encountering humans, those early Galapagos Island inhabitants – none of which were human – were considered by their human compatriots as being “silly” for not possessing fear. If only we humans, then and now, could understand the deepest learnings in this situation: that fear itself (whether for animals or humans) may well and simply be a socialised phenomenon.

The Sufi tradition has a well-known teaching it borrows from the ancient Persian Sufi and Poet, Sa’di, which imparts that: “Each leaf of a tree becomes a book of revelation to the one who sees. And he reads the whole of nature as a book.” (http://wahiduddin.net/saki/saki_date.php?m=5&d=8). By reading the book of nature as written by our animal friends on the Galapagos Islands, we can be reminded of the famed Franklin Delano Roosevelt quote (as he voiced in his first inauguration speech) that: “the only thing we have to fear is…fear itself”, and so learn that there may well be nothing to initially fear in life…. until, that is, fear is given a form and even a name; such as human being or pain.

Joan Chittister, O.S.B., has identified that: “…the ancients of every tradition have been telling us over and over again for eons, ‘God is in me and I am of God and so I and everything are one…’ ” (Illuminated Life. 2000. Orbis Books: Maryknoll, NY. P134). Chittister’s insight speaks to an ancient awareness about an inherent interconnectivity of all life; such as the modern scientific fields of biodiversity, systems thinking, cosmology, and quantum physics and others are now also pointing to.

If we humans could only understand the importance of seeing our sense of self in all others, whether those others are human or non-human beings, then with certainty we could begin to move beyond the fear we seem to deeply hold within us that itself helps root us humans in our more-common, fear-based relationships with others. The book of nature that is read in The Galapagos Islands clearly shows us that a cautiously-fearless life is indeed fully possible for us humans – and between us humans and our animal friends – and is itself not a life of fantasy. Actually, such a cautiously-fearless life may well be inherent to aspects of our life-being. That same book of Galapagos nature may actually be showing us humans an uncomfortable truth: that being that the fantasy we may actually live is the one of a fear of life that we humans have unconsciously created and often live for our own selves.

This is not to say that any one human being should immediately go out and hug an African lion as found on Safari… or hug a stranger’s Pit-bull Terrier for that matter.. Socialisations that have taken root in a being do exist and so have life. This is simply to comment that if fear is a learned socialisation, such as seems to be suggested by animal life that is encountered on the Galapagos Islands, then fear is also a socialisation that can be diminished and even unlearned by us humans and also by those other animal-beings we interact with.

Questions that arise for me after my time enjoyed on The Galapagos Islands include:

1) Might it be that other life, including other human life, fears us humans simply because human animals have created the conditions of fear in those others…? and;

2) Can it be that humanity’s own (albeit, now likely more-unconscious) Freudian Projection of fear is itself what helps give life to our very human fears?

After my experiences in The Galapagos, I wrote a poem about the connectivity of life, which can be found at: http://sustainabilityspirit.wordpress.com/2014/05/09/looking-at-me/

As Julian of Norwich so famously worded in the late 1300’s: “All shall be well, and all shall be well and all manner of thing shall be well.” We humans simply need to believe this to make it true. Imagine how different human lives would be, as well as those lives of other beings, if we humans consciously and intentionally rooted our lives in a hopeful optimism – such as, “all shall be well” – over any sense of fear. A type of hopeful-optimism – a cautiously-fearless life – as seen in the book of nature as read on The Galapagos islands; one where we would inherently have a cautious trust in and not fear of another. In that case heaven, then, might well return to earth…:)

As Charles Darwin, who made famous the Galapagos Islands and from his time spent on them came to propose his Theory of Evolution, himself said: “It is not the strongest of the species that survives, nor the most intelligent that survives. It is the one that is most adaptable to change.” (as quoted in: Charles Darwin Research Station, Galápagos Islands, Isla Santa Cruz, Puerto Ayora, Ecuador). Might a next, even desired if not essential, step in the evolution and so survival of the human being be our adaptation and change to a life of a more-optimistically cautious trust, such as we can learn from the book of nature as read in the life of animal friends found living on The Galapagos…?

Your comments and reflexions on this blog are always welcomed.